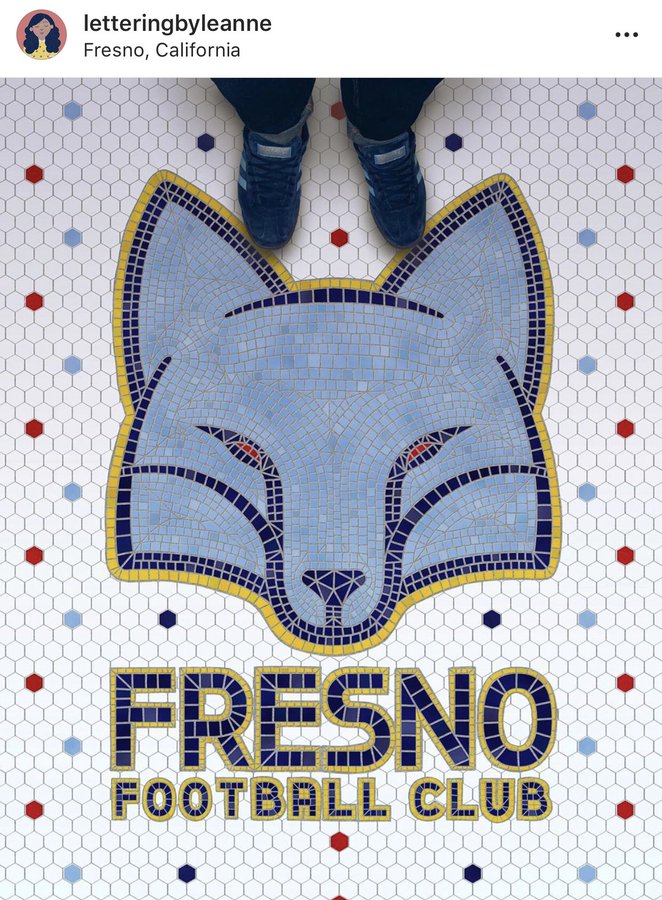 Leanne Frances received an overwhelming amount of support online after posting her tribute to Fresno FC.

Leanne Frances was among the thousands of fans who celebrated the Foxes’ recent win against Phoenix— a dramatic victory which ended Phoenix’s 20-game winning streak in front of a hyped crowd at Chukchansi Park .

“I was feeling an overwhelming sense of pride for Fresno FC after the match against Phoenix,” Frances said. “There was so much good energy and love for the team and for Fresno coming out of that match.”

With the excitement still fresh on her mind on the day after the win, Frances dedicated her Sunday to making an art piece in honor of Fresno FC.

“On Sundays, I usually spend part of my day doodling,” Frances said. “Since I still felt all the good vibes from Saturday’s match, I decided I wanted to draw something to honor the team, our community pride and to keep that positive feeling going.”

Frances expressed her excitement through a digital art form known as “Fauxsaics”, a mosaic illustration which usually includes a pair of legs and shoes standing on the mosaic to make the illusion look real.

Frances discovered the style on social media almost two years ago and learned the methods through tutorials online.

Always been intimidated by #fauxsaics but the love and appreciation I have for Fresno and the Central Valley left me feeling inspired to create one. ✨ True to form, I am dissatisfied with it as a whole – weird lettering spacing and embellishment, wide feet, cankles, and sprained left ankle included – but I can look at it and appreciate the process and the growth I’ve had as I indulge my creative side. I wouldn’t have it any other way. #fresno #fauxsaic A huge shoutout goes out to @abbie_uproot for her awesome Procreate brushes and very thorough tutorial that made this actually achievable for my very novice skills.

When it came to making the illustration for Fresno FC, Frances thought using this style would be a perfect way to pay tribute to the Foxes.

“I also wanted to create artwork that included my husband since he’s a pretty serious Fresno FC and soccer fan, and since he has a huge collection of Adidas, including his pair that he likes to match with his Fresno FC gear,” Frances said.

Although she had tried to include her husband’s shoe collection in her previous artwork, Frances said he wasn’t interested in letting her photograph his shoes until the art involved Fresno FC.

Francis said she went to most of the Fresno FC games with her husband last year and they became season ticket holders this year. The couple then convinced more family members to join them at the matches.

After posting her latest work on social media, Frances said she was surprised by the reception.

“I wasn’t expecting it at all, especially since it’s something I made more for my own creative process and posted to my own social media, where I have a fairly meager filtering for my art,” Frances said.

Fresno FC posted the piece to their social media accounts, leading to a wave of positive responses and generous comments from dozens of people.

We seriously have the best fans 😍😍😍 This amazing digital mosaic was created by @letteringbyleanne! We love when fans combine their passions to create beautiful outcomes. Thanks for sharing this with us, Leanne. ☺️ #somoszorros

“I had a few folks asking where it might be physically located because some thought it was a real mosaic, and some that wished it was real,” Frances said. “It makes me wish I knew how to put a real mosaic together so I could make it happen.”

Francis said she tries to draw or hand letter pieces at least once a week and she hopes to one day have a lettering business.

“I work a full time job in healthcare and that definitely takes a lot of time and energy,” Frances said. “I have done small commissions making signs and illustrations for family and friends. The Fresno FC piece is only digital for now.”

This is legit the coolest thing I’ve ever seen. #somoszorros pic.twitter.com/RQKaxbx0BR