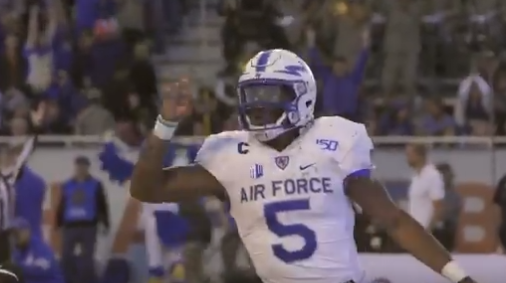 Coming off two straight wins and a bye week, the Fresno State Bulldogs are hitting the road to face to an Air Force team that’s still looking to get on track. But the Bulldogs are not going into the game as clear favorites. While some writers around the nation predict a close Fresno victory in the team’s conference opener, others expect Air Force to walk away with the win at home.

“This game comes down to the offensive line’s performance. Quarterback Jorge Reyna has not thrown an interception since Minnesota and showed he can sling it around when he has time with 326 yards on 28-of-41 completions against Sac State . . . Ronnie Rivers and Josh Hokit can hit another gear with more help in the trenches. Prediction: Fresno State 23, Air Force 20 ” — Jackson Moore, Barkboard

“This one is going to be a challenge for Air Force, who is reeling after their last-minute loss to Navy . . . The Bulldogs have won two straight contests and they have been tough against the run. Fresno State has held the opposition to 109.5 yards per game on the ground and only 3.4 yards per carry this season . . . Give the Bulldogs the advantage in this contest.” — Winners And Whiners


“Altitude is always a bit of a factor for visiting teams at Falcon Stadium . . . Air Force is always tough at home and will look to put the game away with their ground attack . . . Falcons defense will force a key turnover in the fourth quarter and seal what should be a tightly contested battle . . . Prediction: Air Force 27, Fresno State 24″ — Scott Whittum, Athlon Sports

“This is not an easy game to get a read on, but I am going to look for a level of correction, not necessarily desperation to get the Falcons back on track. That loss to Navy could provide the kick they needed, or perhaps will be remembered as a deathblow at seasons end. I believe there is more fortitude to this Falcon team than to fold. Air Force 27 – Fresno State 24” — Sean O’Toole, Mountain West Wire