Redcats Deliver On A Promise, Bring Section Title For Boys Soccer To Fowler 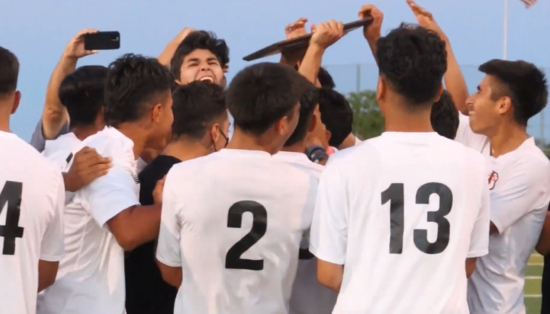 When Carlos Hidalgo scored the game-winner in the golden goal period of Fowler’s epic championship match against Mendota, his team officially delivered on a promise they made at the beginning of the season.

That promise, inspired by first-year head coach Jesse Camarena, was tested in many ways. But the Redcats answered every challenge and made true on their vow — bringing the Central Section D5 title in boys soccer to Fowler for the first time since 2002 .

“We knew we were gonna get here,” Hidalgo said. “Our coach believed in us. I believed in the whole team and it happened.”

Hidalgo and his teammates faced adversity early in the championship game, falling behind 1-0 against the home team, which was trying to win a second-straight section title. It was Amilar Pineda who opened the scoring for Mendota at Aztec Stadium, netting the goal in the 15th minute. The Redcats, however, responded in the 35th minute when Silvestre Quintero received a pass from Gabino Barranco and converted from close range to tie the game.

Still, Quintero and his teammates weren’t pleased with their first half performance. So they huddled at halftime and engaged in a spirited conversation, reminding each other that everybody must be held accountable if the dream is going to come true.

But it was Mendota who responded first after the break, taking a 2-1 lead when Louis Ochoa launched a strike from about 35 yards out to beat the keeper, Sergio Ramos.

“I felt like it was my fault,” Ramos said.

The senior keeper would have his own shining moment later in overtime. Before the match arrived at that stage, however, Ramos took a knee and anxiously watched from his own goal as the Redcats earned a penalty kick.

Ashton Escamilla took a few deep breaths and stepped up to the penalty spot as the scoreboard showed five minutes left in regulation. Escamilla then cooly placed the ball into the back of the net, sending the keeper the wrong way. A sigh of relief swept over the packed visitors’ section while the Redcats erupted into a euphoric celebration on the field.

With the Redcats’ defense holding firm and Ramos shaking off the earlier disappointment to come up with big plays, the game remained at 2-2 after overtime. That set the stage for the golden goal stanza.

Fowler, which came to Mendota earlier in the season and suffered a loss, refused to go out the same way again.

“We came here probably a month ago, we outplayed them, should have beat them,” Camarena said. “We knew coming here, it was gonna be a good game, but my guys knew what was at stake.”

Just as the game appeared to be heading to penalty kicks, Hidalgo paused for a moment, fixed his eyes on the goal and smashed the ball over the leaping keeper, delivering the final blow to Mendota’s hopes.

The home crowd fell silent while Fowler supporters rushed the field to embrace the Redcats. And the first-year head coach, who delivered on his promise, was doused with the celebratory shower.

Camarena praised his entire team after the win, but especially applauded his keeper.

“My keeper was so big us for us this year. He gets down on himself, but at the end of the day, he’s a high-caliber keeper. He has proven that day-in and day-out at training. When it mattered most, he showed up,” the coach said.

“I saw the coaches telling me to relax. After that, I came back and made up for it,” Ramos said as he reflected on the goal Fowler allowed in the second half.

Gabino Barranco, another player who has seen his share of setbacks through the years, also embodies the team’s resilience.

“After all the sad memories, it feels amazing,” Barranco said. “Freshman year, I couldn’t play because I hurt my knee and the other two I got limited.”

But the key, according to the senior, is to “just keep working hard.”

“That’s all. If you just stop for a day, somebody else is working harder than you. If that happens, they’re just gonna get ahead of you,” he said.